The 17,000 NHANES images are available in the following formats: 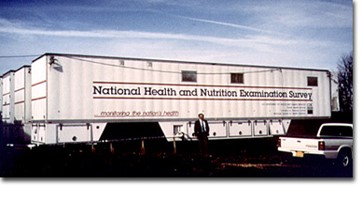 
The National Health and Nutrition Examination Surveys (NHANES), conducted by the National Center for Health Statistics, Centers for Disease Control (NCHS/CDC), were designed to assess the health and nutritional status of adults and children in the United States through interviews and direct physical examinations.

These images are the digitized versions of the 17,000 x-ray films collected during the Second National Health and Nutrition Examination Survey (NHANES II) conducted by the NCHS during the years 1976-1980. In NHANES II 20,322 individuals were both interviewed and examined. For examined persons aged 25 through 74, two x-rays were made, with the exceptions that no x-rays were taken of pregnant women and no lumbar x-rays were taken on women under 50 years of age. X-rays of the cervical and lumbar spines were taken to provide evidence of osteoarthitis and degenerative disc disease.

The films were subsequently digitized at a horizontal and vertical sampling rate of 146 dpi using Lumisys laser scanning equipment.

NOTE: This dataset is no-longer updated with new content.