Every Necessary Care and Attention: George Washington and Medicine 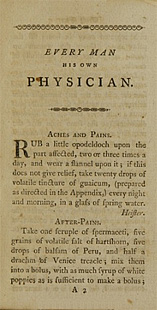 George and Martha Washington were affected by their own medical issues over the years. Although he was never wounded in battle, Washington led an active life and was injured several times while horseback riding. He nearly died from a severe case of dysentery as a young man, but survived to face other serious illnesses including anthrax, pneumonia, and skin cancer. Martha Washington contracted measles in the first year of their marriage and suffered from gall bladder disease as she aged.

Like others on the plantation, the Washingtons experienced seasonal malaria and lung problems. Later in life, they dealt with such age-related concerns as rheumatism, hearing loss, and failing eye-sight. The responsibilities both had for looking after the health of others in the family and on the plantation continued despite these difficulties.

“I retain an unalterable affection for you…”
Above quote from a letter from George Washington to Martha Washington, June 23, 1775