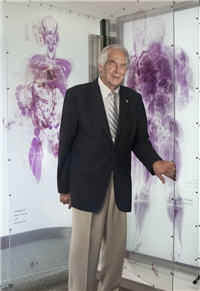 Donald A.B. Lindberg, M.D., a scientist who had pioneered in applying computer technology to health care beginning in 1960 at the University of Missouri, in 1984 was appointed Director of the National Library of Medicine, the world’s largest biomedical library (annual budget $400 million; nearly 829 career staff). From 1992-1995, he served in a concurrent position as founding Director of the White House High Performance Computing and Communications Program, (annual budget $1.1 billion; 12 federal agencies, including DOD, DOE, NSF, NASA, HHS, VHA, DOC, EPA). In 1996, he was named by the HHS Secretary to be the U.S. Coordinator for the G-7 Global Healthcare Applications Project. He is a leader in the Federal Networking and Information Technology Research and Development (NITRD) initiative to improve health and health care.

In addition to an eminent career in pathology, Dr. Lindberg had made notable contributions to information and computer activities in medical diagnosis, artificial intelligence, and educational programs. Before his appointment as NLM Director, he was Professor of Information Science and Professor of Pathology at the University of Missouri-Columbia.

Dr. Lindberg was elected the first President of the American Medical Informatics Association (AMIA). He is also a founding member of the Health on the Net Foundation, an international organization devoted to guiding patients and providers to sound, reliable health information. As the country’s senior statesman for medicine and computers, he had been called upon to serve on many boards including the Computer Science and Engineering Board of the National Academy of Sciences, the National Board of Medical Examiners, the Council of the Institute of Medicine of the National Academy of Sciences.

Dr. Lindberg was the author of three books: The Computer and Medical Care; Computers in Life Science Research; and The Growth of Medical Information Systems in the United States, several book chapters, and more than 200 articles and reports. He had served as editor and editorial board member of nine publications including the Journal of the American Medical Association.