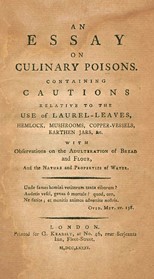 An essay on culinary poisons: containing cautions relative to the use, ..., 1781

Slavery was never benevolent or kind. Despite the realm of opportunities provided a slave, she or he always desired freedom and liberty.

Because of their status on the plantation, some slaves were awarded extra privileges. These privileges may have included the ability to earn income from selling leftover foodstuffs or their own crops in the marketplace; the opportunity to wear fine clothes; and, permission to travel outside the plantation. Despite these advantages, slaves, no matter how revered or “well-treated,” still longed for freedom. Holidays, with relaxed work schedules and absent slaveholders, along with festive events provided opportunities for escape.