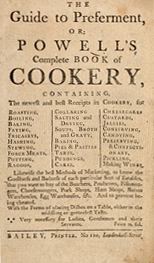 The guide to preferment: or, Powell’s complete book of cookery, 1785

Slavery put in place social and culinary boundaries that could separate those who ate from those who worked.

In the fields, women and men killed hogs, shelled corn, planted and gathered crops, dug holes for fence poles, and performed other seasonal agrarian duties. There was a hierarchy among domestic slaves. Scullions handled the menial tasks in the kitchen. Maids and houseboys assisted the butler, who guaranteed that meal times were coordinated.