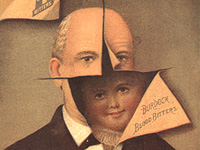 America’s Mind-Altering History module offers six one-hour classes focused on the history of psychoactive substances, their many uses and users, and their regulation from colonial times to the present. The module uses the realization that American society has never been “drug-free” and that popular images of alcohol and drugs, and expert opinions on drinking and drug use comprise important barometers of social change and cultural values in the United States. The six classes in this module offer a starting point for educators who wish to introduce the topic of drug use in broader courses in American history, American studies, or history of medicine, and for those who want to develop a course specifically about the history of psychoactive drugs.

Class 1. Psychoactive Substances, their Use and their History provides an introduction to the reasons people employ psychoactive drugs—e.g., for recreational, medicinal, religious, and performance-enhancing purposes. It also explores some of the important factors that shape the experience of using mind-altering drugs—e.g., pharmacology, physiology, mindset of user, context of use. The class also explores why both historians and neuroscientists have argued that it is profitable to consider licit and illicit, recreational and medicinal, and “hard” and “soft” drugs together, as a given psychoactive substance rarely remains in just one of these categories for the entire lifetime of its use.

Class 2. Addiction—An American Way of Life examines the controversial status of addiction in the United States. Whether regarded as a disease, a moral failing, both, or neither, addiction has become a dominant metaphor for describing an individual’s loss of control over his or her drug habit, and the negative consequences of this loss for the individual and those close to them. Increasingly the term “addiction” has been extended to behaviors such as sex, gambling, and Internet use. This class explores the controversy surrounding the status of “the addict,” and probes the ways in which that status depends on the demographic characteristics (gender, ethnicity, class) of the individual, as well as Americans’ evolving cultural, political, economic, and religious values.

Class 3. King Alcohol—The Biography of Alcohol in America examines important episodes in the history of alcohol use and reform in the United States. It explores the ways in which both the images of alcohol and its consumption, and the problems associated with its use, are shaped by the gender, ethnicity, and class of its users, as well as the temporal and spatial contexts of its use. The class discusses the politics of the temperance movement in the 19th and 20th centuries, as well as how cultural norms, political imperatives, and new technologies have impacted the act of drinking and its consequences.

Class 4. Demon Weed or Medical Panacea? The Many Lives of Marijuana examines marijuana’s changing place in American culture. The class moves from the colonial settlers of Jamestown, who cultivated hemp for rope, to marijuana’s inclusion in the U.S. Pharmacopoeia between 1850 and 1941, to the DEA’s classification of the drug as dangerous and without medical benefit in 1970, to its legalization in 1996 for medical purposes in California. Perhaps no drug in U.S. history better reveals the importance of shifting political priorities, cultural values, and user demographics in shaping the perception of psychoactive substances or the contingency of classifying drugs as “licit” and “illicit,” “recreational” and “medicinal.”

Class 5. Combat, Counter-culture, and Kids—From Amphetamine to Ritalin reviews the history of amphetamine from its use as a performance-enhancing drug for pilots and soldiers who needed to stay awake, vigilant, and aggressive, to its rise as a counter-culture drug that inspired the Beat generation, to its status as a staple consumed by distracted, often hyperactive, American schoolchildren. Few drugs have been deployed as variably, successfully, and at times perilously, as amphetamines, and few drugs reveal as much about the American character and American values when used in myriad contexts. Today, moreover, the methamphetamine epidemic may be seen as a symptom of the economic collapse of rural America and the rise of global agribusiness and a global trade.

Class 6. The Cigarette and the American Century explores the rise and fall of the cigarette in American society in the 20th century. What began as a stigmatized form of tobacco became synonymous with women’s rights, modernity, and patriotism in the early decades of the 20th century. As the Red Cross distributed cigarettes to troops in WWI, soldiers around the globe became hooked on nicotine, and the tobacco industry enjoyed the enormous profits tied to cigarette sales. Masculinized through the Marlboro Man and feminized through Virginia Slims, cigarettes were a staple of the American cultural landscape for most of the 20th century. By mid-century, mounting evidence indicated that cigarettes caused cancer, but the U.S. Surgeon General did not require cigarette labels stating this until 1985. Only with the 1998 Tobacco Master Settlement Agreement, did the tobacco industry begin to pay for a century of damage to the public’s health. In the meantime, the same companies turned to overseas markets and a new ancillary industry emerged domestically—smoking cessation.