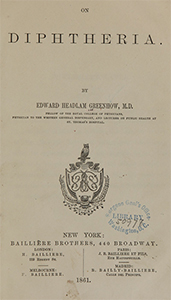 Humans and animals have natural defense systems that produce antibodies in the blood to combat bacteria and other harmful substances invading the body. In the late nineteenth century, scientists investigating this immune response in animals developed new methods for treating diseases in humans.

One of these early therapies used blood serum, collected from animals inoculated with toxins from bacteria. The natural protection these animals developed against the toxin could be passed to humans through injections of the serum. In commercial production, horses and other large animals served as living serum factories to grow the so-called “antitoxins” for human use.

Serum therapy provided an effective cure for diphtheria, an often fatal childhood disease. The demand for serum established a new drug industry that required the use of large numbers of animals for production.