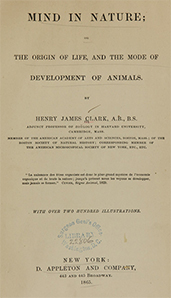 Mind in nature, or, The origin of life, and the mode of development of animals

All organisms, from microbes to humans, are governed by the genetic code embedded in their DNA. In the 1970s, scientists inserted a human gene into the genetic material of a common bacterium. This so-called “recombinant” microorganism could produce the protein encoded by the human gene.

Eager to explore the potential of this recombinant DNA technique, investors joined forces with research scientists to develop industrial applications. Two of the earliest products to reach the market were human insulin, used to treat diabetes, and human growth hormone, used in children with pituitary gland disorders.

Recombinant technology provided a commercially viable way to make proteins for medical use and gave rise to a new industry–dubbed “biotech.”