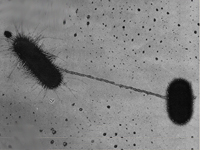 This module accompanies the exhibition From DNA to Beer: Harnessing Nature in Medicine and Industry, which features the discovery of recombinant DNA technology in the 1970s. This module begins with that discovery and comes up to the 2010s, showing the continuing relevance of the issues that the exhibition raises. How far should we go in our desire and ability to remake nature and ourselves? What happens when technologies intended for one use have other, perhaps unexpected, outcomes? What role (if any) should intangible values—like justice, dignity, or the inviolability of nature—play in debates about technology? These questions are still as pressing as they were in Pasteur’s day. This module encourages students to see how broad issues like these come into play in debates that might at first glance seem as though they are about purely technical matters. Both the module and the exhibition argue that biotechnology is as much about our visions of what our society and our world should look like as it is about scientific discovery and technical advance.

The module is composed of six one-hour classes grouped into three thematic parts, each part centered on a different aspect of modern biotechnology. Each class provides a selection of resources, including primary documents, films, images, and secondary works, along with suggested questions for class discussion and debate.

Information about the module’s author, suggested use, and academic objectives is also available online at About the Module.

Part 1. Biotechnology as the manipulation of life: the recombinant DNA debate of the 1970s contains material for two classes that will allow students to understand and re-enact a historical moment of divisive controversy at the birth of modern biotechnology. Scientists and laymen disagreed about how to define the risks of recombinant DNA research, and whether and how to regulate such research and the fledgling industry it fostered.

Part 2. Biotechnology as big business: patenting life from Chakrabarty to Myriad contains material for two classes that explore how United States patenting policies—particularly the patenting of life forms—shaped and fostered the biotechnology industry. The 2013 Supreme Court case challenging the gene patents held by Myriad Genetics provides a focal point for the ethical, legal, and policy issues.

Part 3. Biotechnology as a new eugenics: genetic testing and reproductive technologies focuses on the ethical questions raised by the genetic screening of gametes, embryos, and fetuses, and the genetic testing of potential parents. Such genetic tests grant a disputed power to choose the next generation’s traits. The class materials set debates over the ethics of reprogenetic testing into the context of the history of eugenics, and by presenting specific case studies encourage students to ask at what point—if any—choice goes too far.